For the last couple of years, as a Pagan/Polytheist alternative to the traditional ‘Twelve Days of Christmas’ (26th December – 6th January) I have been practicing twelve days of devotion to Gwyn ap Nudd, my patron God, as a Brythonic Winter King.

This year, over the twelve days, I am going to be meditating on the following aspects of His identity and mythos and writing and sharing devotional poems addressed to Him.

I. Your Birth
II. Your Boyhood
III. Your Hunt
IV. Your Beloved
V. Your Battle
VI. Winter
VII. Your Horse
VIII. Your Hound
IX. Your Doors
X. Your Kingdom
XI. Your Cauldron
XII. Your Death

If you would like to join in with this or do something similar for Gwyn or your personal Gods please feel welcome and let me know how it goes.

Nobody knows where the Lost Temple of Nodens on the Lancashire coast once stood.

All we know is that two silver Romano-British statuettes dedicated to Nodens as Mars-Nodontis were found on Cockerham Moss (in the 19th century?) and have since been stolen.

I believe it is likely they came from a shrine. My meditations reveal nothing more than the shuffling of robes against chapped skin, quick stitches undone rubbing bare legs, splashing feet. I do not know if they were dropped or deposited, whether by thieves or priests.

I long to know what the statues looked like, who shaped the Cloud Shaper from the clouds and gave him a form and name, who caught the Catcher with his catching hand, so fittingly made of silver

I long to know who brought them back from the Isles of Dream, from the Land of Nod, where our mythos is always forming, ever forming, from the combining of elements into molecules, where air meets water, from the oceans whence emerged the first life where he embraced his consort.

Long I have pondered the existence of his temple, never really got there, seen only the yawn of a priest called Slumber in a huge mouth-like hood and the departures of countless peregrini.

Yet my focus has been on the past. He and the cloud-shapers still shape the clouds as their temple.

Last week a group of polytheists came together to connect with Nodens in the misty interstices of the internet where we might sense him working with Gobannos in the co-creation of other worlds.

When we journeyed to the Lost Temple of Nodens we did not find an ancient temple, but a temple in progress, shaped from clouds, ‘like a cartoon in the making’*, becoming in the here-and-now.

I do not know how or if this temple will be built as its mysteries escape me like the phenomenon of a god made of mist becoming flesh and, on the battlefield, losing his hand, having it replaced by silver.

I do not know how I was touched by that hand, reaching out across the seas, from the Abyss.

I do not know how something comes from nothing, the distinction between dé and andé, god and un-god.

Temples are swept away by the sea, what is dissolved is lost, knowing the past is impossible.

The impossibility of truth shines like a star that died millions of years ago yet is seen by us so far away.

Perhaps in loss we recall ourselves through the light years – ours the silver hands to shape the now – the subtle vibrations of molecules that respond to form our temples in the old gods’ names.

This piece is based on a meditation on the lost temple of Nodens which I ran with Thornsilver Hollysong and Bryan Hewitt for Land Sea Sky Travel on the Nodens/Nudd day of our ‘Tylwyth Gwyn’ series.

*The quote ‘like a cartoon in the making’ was how one of the participants, Emily Kamp, described the temple. She has kindly given me permission to use her words.

how like moonlight they waltz
where the shells
are not cracked and peeling.
The walruses and the distant military
come to seek healing their dark hands held out like flippers.
How I long to dance in the shell of the moon
where the wounded masks fall away
like faces where the craters
are not too deep
to heal.


The dark people on the silver beach

when the horses left their hoofprints in the sand
they were taken to the dance
after the explosion
after counting
to ten.

The dark people on the silver beach

the seals of their souls wear anoraks now
their children lick ice-creams.

The dark people on the silver beach

do not know who they are
who they were until
the dance begins.

I dance amongst them. Look – a shoal of dolphins!
How they bend their backs and arch
into the deep sea. 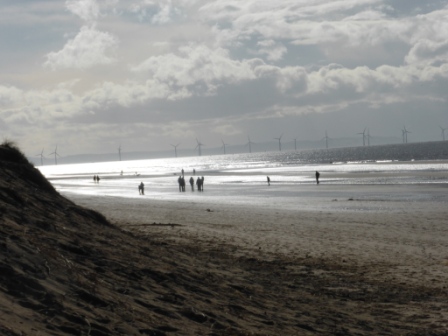 *Last month I visited Formby Beach and took this photograph. During a full moon meditation I saw a vision of ‘the dark people on the silver beach’ dancing there by moonlight and that inspired this poem.

Yesterday I had a most uncanny experience. Approaching the river Ribble from Castle Hill, I found myself facing a long stretch of tide marked wall that gave the appearance it had dropped away into nowhere. I was struck by a sudden sense of vertigo. The Ribble couldn’t have disappeared, as if had fallen into a void, surely? 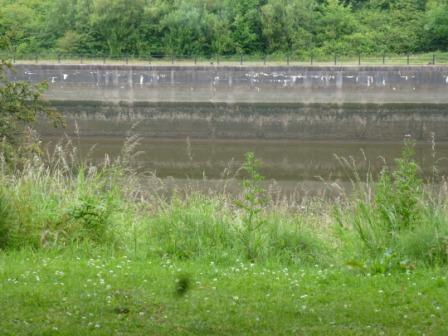 On closer inspection, seeing the reflections of the grilles and staircases, and catching subtle fluctuations in the surface of the water, I realised this was an illusion created by a combination of its stillness with the markings on the stone. 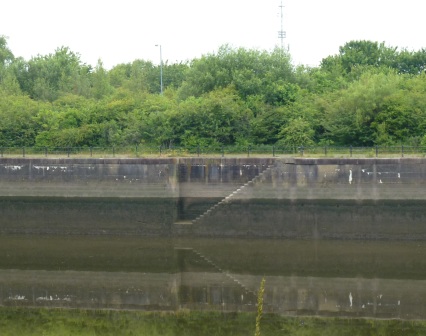 To my relief at either end of the concrete barriers, the ‘true’ water level was clear.

Drawn  to stay a while in meditation on the strange appearance and disappearance of the river, which occurred as I shifted my eye-line, I was gifted with the sight of several birds. Common and black headed gulls and terns circled, their darker shadows mirrored in the water. Another bird, which I think may have been a grebe or even a black throated diver flew in. Diving with quick flips of its tail it emerged, for the most part, triumphant with white-silver fish, which after a brief kerfuffle vanished down its throat. Finally, a heron arrived to land majestically on a piece of flotsam.

For me this goes to show that even where it is channelled, the Ribble is a magical and mind altering place. I give thanks to the river, all its visitors and inhabitants, and its goddess Belisama.