On August 31st this year I celebrated the ten year anniversary of meeting my patron God, Gwyn ap Nudd, at the leaning yew on Fairy Lane in my home town of Penwortham.

For those who don’t know the story, Gwyn appeared to me in a visionary encounter at the head of my local fairy funeral procession. He revealed His name and offered me the opportunity to journey with him in spirit to Annwn, (the Brythonic Otherworld) on the condition I give up my ambition to be a professional writer.

Recognising Him as the deity who had long been calling me to the Otherworld and a once-in-a-lifetime opportunity to establish a relationship with the God to whom my soul already belonged, I agreed.

The following January full moon I made my intitial vows to Him as my patron God, as his ‘apprentice’, and soon afterwards learnt the name of my path – awenydd ‘person inspired.’ On the super blood wolf moon in 2019 I made lifelong vows to Him.

It’s been ten years now and a lot has changed. On the day of my anniversary I visited the yew, made an offering of mead, gave my thanks to Gwyn and spent some time in meditation and in conversation with Him.

Since then I have been reflecting on the past ten years and the ways my devotional relationship with Him have shaped and changed my life.

During this period Gwyn has been there as a source of guidance and inspiration in my devotions, my journeywork, my prayers, guiding my work as His awenydd in poetry, storytelling, in writing my three books.

He’s not only supported me through my successes but my messiness and meltdowns. I have been able to talk to Him about anything, no matter how dark, because I know that, as the Lord of Annwn and Gatherer of Souls, He’s been with the mad, the dying, the dead, will be there for me at the end and after.

On a more difficult note He has consistently called me to my truth. This has been a tough process which has involved quite a lot of unmasking and a surrendering of my desires to fit in, reach a wide audience, and gain financial security.

After my latest straying into an attempt to become an ecologist I have again been stripped bare of all masks and brought back to my role as His awenydd and a step closer to my truth in His calling for me to become a nun of Annwn.

Finally, at the age of forty, ten years since our meeting, I have come to realise that He is my truth. That only when I honour Him and do His work, I am blessed.

I am currently moving into a new phase of my life exploring what becoming a nun of Annwn will mean within the context of building the Monastery of Annwn.

I am developing a monastic routine and practices and treating my bedroom, which already holds every part of my life, including my altars, as a monastic cell. My work as an awenydd, devotional creativity, sharing inspiration, at present through writing my next book ‘In the Deep’ for my Gods, remains central.

Having learnt from my mistakes I am looking forward to a life in which my relationship with Gwyn and my spiritual path are its truth and sacred heart.

‘For beauty is nothing but the beginning of terror
which we are barely able to endure, and it amazes us so,
because it serenely disdains to destroy us’
– Rilke

I grew up with negative connotations of prayer and still do not fully understand what it is, only that I prayed reflexively at frightening times in my life and someone answered. It was a long while until I found out who that was, began exploring prayer as a regular practice, and came to realise prayer is a fundamental means of reaching out to the gods essential to our being.

Brought up in a nominally Christian family I was never forced to pray, but vaguely recall sleeping at a friend’s house and both us having to say ‘The Lord’s Prayer’ before we went to bed. We jabbered through it as quickly as we could, not thinking about its meaning. She thought God was called Harold, mistaking ‘hallowed’ for ‘Harold’ in ‘hallowed be thy name’.

I went to Sunday School and attended church parade at St Leonard’s C of E Church with Brownies. Some part of my soul rebelled against the rigid services, punitive black-and-white theology, and the patriarchal presence of the Christian God. Eventually I refused outright to go.

Refusing to worship Jahweh I considered myself an atheist for a number of years even though I was looking for something… somebody… I was drawn to the deities of our world myths, but the mainstream worldview taught they belonged to a naive past, even though I could sense their presences dancing in the back of my mind like sunspots long after I’d put down a book.

Without knowing of the existence of modern Paganism or Polytheism I had no context for the sense of the divine I felt in the landscape, for otherworldly experiences some beautiful, some troubling. In moments of terror I prayed although I did not know who I was praying to.

The root of ‘prayer’ is the Latin precarius, ‘obtained by treaty’, which gives us ‘precarious’, suggesting such treaties are made in ‘risky, dangerous, uncertain’ situations. Non-religious people often pray when their lives or those of their loved ones are threatened; like it’s a base instinct, a mechanism deep-wired within our souls to reach out to the divine when faced with peril.

At times when I had panic attacks or thought I was going mad I prayed. Driving on the motorway in the midst of panic, thinking I was going to lose consciousness or control, I felt strangely held. Despite fears I would never get back I always did. When I was convinced I was mad, that I couldn’t tell what was real and what was not anymore, into my mind came the words, “So you’re mad, what difference does it make?” (I’d thought this was a quote remembered from Nietzsche, who walked with mad gods, but have never been able to find it). Nothing, I realised, nothing at all, and since then madness has held no fear for me.

It wasn’t until I was thirty I met the god who was behind my visions of the Otherworld; who’d led me a chase through poetry, philosophy, drink, dancing, to the brink of the abyss and back: Gwyn ap Nudd, the Hunter, Rider of Insomniac Nights, Gatherer of Souls, Light of the Mist.

This happened at a nadir of despair. After failing to become a philosophy lecturer and succeed in a career with horses, I had realised the fantasy novel I spent two years writing was unpublishable. I couldn’t think of anything else I wanted to do with my life or any reason to go on. Yet something within me put out an entreaty, ‘a cry from the heart’. Summoned by tolling bells I went to weep beneath a leaning yew tree at an old fairy site and sang a sad song.

When Gwyn appeared to me I was struck by a sense of awe bordering on panic by his terrible beauty:

His spectral shine shimmers white as moonlight
His hair floats fair about his phantom limbs
His warrior attire is black as night.
The eyes of the hunter of souls are grim
As the howl of his hounds on Annwn’s winds.

This was followed immediately by recognition. It was he who swept me away on the winds of terror like the riders on his hunt – I often felt like I was flying ‘between sky and air’ – yet also held me and taught me I was safe. He was the storm and the calm at its centre. He, the god of the dead, the mad, and poets, was the source of the words that cured my fear of madness. He was the somebody I’d always been looking for. Always. Since the beginning of time.

Some soul-deep entreaty/prayer had been answered. A treaty between us soon followed. I dedicated myself to Gwyn as my patron, vowing to honour him daily, stand by my truth, and walk between Thisworld and Annwn (the Brythonic Otherworld which he rules) with reverence. I became his awenydd ‘person inspired’ and have been praying to him every day since.

My initial cries of “Please, please, please help me!” opened a gateway of communication between my god and I, unlocked my heart to the divine, to sacred relationship. In Judaism prayer is defined as ‘a service of the heart’ (from Deuteronomy ‘You will serve God with your whole heart’), describing beautifully the depth of service my knee-jerk prayers have led to.

Not only do I pray to Gwyn for inspiration and guidance, but I see my role of journeying with him between the worlds to recover the lost stories of my landscape from the mists of time and reveal the roots of his forgotten myths as a heartfelt and prayerful process essential to my being.

Sadly, in secular society, even when prayers are answered too few of us question by whom or fulfil our side of the treaty. Our potential for relationship with the divine – to reach outside our everyday lives and enter the service of somebody or something greater – remains unfulfilled.

Obscured by oppressive state religions and secular norms our ability to pray remains dormant until precarious times when somebody opens a door. Could it be that we are fundamentally prayerful creatures? That prayer is the heart-root of all purpose, meaning, our relationships with the gods?

*This article was published in ‘People of Prayer‘, Isis-Seshat, Issue 41, Vol. 13, Spring 2018
**I will be speaking on ‘Becoming a Devotee of Gwyn ap Nudd’ at the Pagan Federation North West Conference at Preston Grasshoppers on Saturday.

when the skies were haunted
by hunting calls of owls

beneath the branches
of the leaning yew

I made my lifelong vows
to Gwyn ap Nudd.

Ywen
dark guardian
guardian of us all 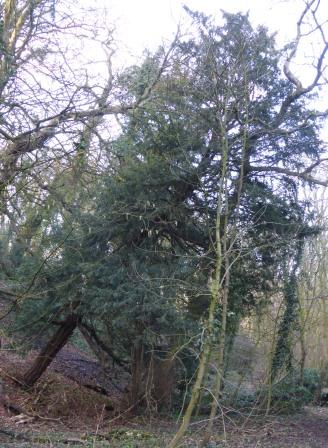 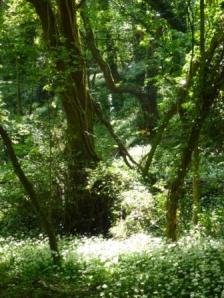 A forest
holds a very small possibility
in the sigla of trees
and in a ruddock’s song.

Raindrops lace the ivy,
in a cinema of shade
fairytales catch hands
with desperate grace.

For in my nightmare
the leaning yew fell down.
The door to Annwn closed,
although the wolves still howl.

The people were dead,
the gods were gone
and the ghosts no longer mourned
their shadowed passing.

like a white stag bounding
from Annwn’s mounds
with red-eared hounds
and antlered huntsmen.

Now we read
the sigla from the trees
and listen out
for a ruddock’s song.

In the cinema of ivy
our myths still dance
a forest of possibility
in a raindrop’s glance.