In ‘The Spoils of Annwn, after Taliesin has finished narrating Arthur’s raid, he continues to mock the monks (earlier referred to as ‘pathetic men’) because they do not know the answers to certain riddles.

The opening ‘Myneich dychnut val cunin cor / o gyfranc udyd ae gwidanhor’ has been translated ‘Monks congregate like a pack of dogs / because of the clash between masters who know’ and ‘Monks howl like a choir of dogs / from an encounter with lords who know’.

Dychnut may derive from cnut ‘pack of hounds, wolves’ or *dychnudo, an archaism meaning ‘howl’. Cun means ‘pack of dogs’ or ‘lord’. The primary meaning of cor is ‘choir’, but it is also used to refer to groups such as ‘a host of angels’ or ‘a company of bards’. Côr bytheiaid and côr hela  both mean ‘kennel or pack of hounds’. Udyd may be the plural of ud ‘lord’ or relate to udaw ‘howl’.

In these ambiguous, carefully chosen words, dogs/wolves, choirs, lords and howling are cleverly and intricately linked. These intricate connections are unfortunately not conveyed by the English language.

Within Welsh tradition numerous divine ‘lords’ are associated with hounds: Cunomaglus ‘Hound Lord’; Cunobelinus ‘Hound of Belinus’; Nudd who Taliesin refers to as ‘the superior wolf lord’ and his son, Gwyn ap Nudd, who owns a hound called Dormach ‘Death’s Door’ and hunts with the Cwn Annwn. Another is Arawn who, like Gwyn, is a ruler of Annwn and associated with white, red-eared Annuvian hounds. It seems possible Taliesin is comparing the howling monks with their howling hounds.

Cyfranc means ‘clash, contention’ or ‘tale, story’. This brings to mind Taliesin’s clash with the bards of Maelgwn in The Story of Taliesin. Taliesin enters this contest to rescue his master, Elphin, son of Gwyddno Garanhir, from Maelgwn’s imprisonment.

Gwidanhor ‘one who knows’ (from gwybod ‘know’) shares a likeness with Gwyddno Garanhir ‘knowing one’. In The Conversation of Gwyn ap Nudd and Gwyddno Garanhir, Gwyddno converses with Gwyn and meets his hound, Dormach. Gwyn reminds Gwyddno that Dormach ‘was with Maelgwn’. These complex mythic intersections would have been in a medieval Welsh audience’s mind.

Taliesin claims the lords/masters  know, ‘Whether the wind (follows) a single path, whether the sea is all one water, / whether fire – an unstoppable force is all one spark’. In The Story of Taliesin, Taliesin wins the contest with a series of poems including an extended riddle about the wind. He is claiming knowledge of the elements Maelgwn’s bards do not possess.

Taliesin counts himself amongst the ‘knowing ones’ initiated into the mysteries of the universe alongside lords/masters such as Gwyddno and Gwyn. The howling of the monks parodies their otherworldly company.

The next verse continues in a similar vein:

‘Monks congregate like wolves
because of the clash between masters who know.
They (the monks) don’t know how the darkness and light divide,
(nor) the wind’s course, its onrush,
what place it devastates, what land it strikes,
how many saints are in the void, and how many altars.’

The reference to the monks’ lack of knowledge of where darkness and light divide echoes preceding verses where Taliesin mocks them for not knowing the divisions of time nor when Pen Annwn ‘Head of Annwn’ was conceived or born. These questions are intrinsically linked as Pen Annwn is associated with the transitions between night and day, the seasons and the mysteries of death and rebirth.

The line referring to saints and altars being ‘in the void’ is intriguing. This may relate back to the transitional period between paganism and Christianity when the links between Annwn and the dead were severed and Annwn was re-construed as a hellish (hot, cold or empty) place.

In the final lines Taliesin says, ‘I praise the Lord, the great Ruler: / may I not endure sadness: Christ will reward me.’ The ending is undeniably Christian yet in Pendefic mawr, ‘great Ruler’ we find traces of a most un-Christian lord: Pen Annwn.

So the end of the poem has been reached. Arthur and his men have raided Annwn and slammed its gate shut. As Taliesin returns to his chair in Caer Siddi we’re left contemplating a trail of destruction amongst the howling monks whose choir echoes the howling of the hounds of the Lord(s) of Annwn.

The monks howl.
We howl with them.
There is no turning back
to when Annwn was unspoilt
before the flashing sword
the stolen cauldron
and trail of death. 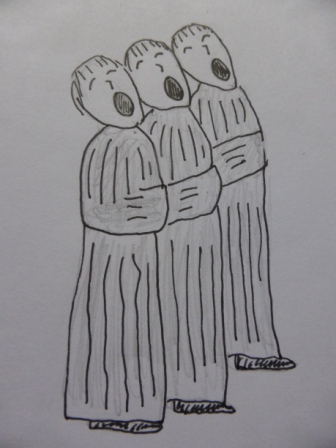 *The translations of Preiddu Annwn ‘The Spoils of Annwn’ I have used are Marged Haycock’s from Legendary Poems of Taliesin and Sarah Higley’s HERE. With thanks to Heron for notes on cor from The University of Wales Dictionary. 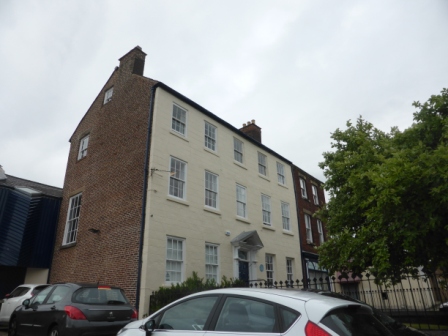 When Richard Arkwright played the devil’s bagpipes on Stoneygate a giant hush came over the town. The blistering whirring sound against the pink horizon of a sun that would not set over clear sights for two centuries of soot and smog was damnable. Yes damnable! Gathering in storm clouds over Snape Fell.

You who have seen a premonition might have heard the village seers tell of smoke for flesh charry knees and the squalor of shanty towns. Red brick mills turning satanic faces to the coin of their heliotropic sun: Empire.

How he rubbed gristly chubby jaws and did not see the unfairness of profit or tightly curled hair when hair-pin thin people laboured in his thrall. How he played the devil’s bagpipes over breached bones of the dead then one day toppled pot-bellied splay-legged from his cushy stool.

In bugle layers of this town decided long ago I long to rush through industrial rain, knock and knock on his front door and beg him to stop. But know he will not listen. Only play on and on laughing his demonic laugh. So we dance the hurly-burly on the ruins of Horrocks’ back yard in a splash of flowers and cement as if it is our last.

The huntsman has ridden all night, following the brilliance of the spirit roads- the shining tracks that criss-cross the island of Britain. Instead of returning home he remains here for dawn, listening to the idiosyncrasies of each bird’s song, watching dew form on blades of grass, on petals of hawthorn blossoms and may flowers.

He is and is not the mist, riding through damp meadows over hills, mountains and moors on a pale horse accompanied by a hound of the same complexion. He is and is not each sun-lit cloud he travels with, the touch and whisper of the wind.

He cannot stay here long, for this world we see as the land of the living is not his. He must return home to Annwn, the Otherworld, to prepare for a battle that cannot be won. To fight for a maiden he shouldn’t have loved, shouldn’t still love… in bluebells and forget-me-nots, emerging greens and white and yellow flowers he sees her colours.

For a moment he is possessed by memories of their passion, and the crimes it drove him to. A glimpse of his blacked face in a reed strewn pool shows no amount of war paint can mask his guilt, which he must live with for as long as there are people to sing his songs.

He searches for a sign. What is Judgement Day? When is it? Although he knows the language of the trees and plants, the tracks of every wild creature and the flight of birds, these questions are beyond his power to divine. When the worlds end, will Creiddylad and I be together again?

When the wild hunt rides on a thundering night
Hurtling from the deeps and bowers of unseen Annwn
They raze all life with their sundering might,

Sweeping heavens black warriors of starry white
Unite with rebel cries to form a spectral fugue.
When the wild hunt rides on a thundering night

Cities tremble as the harrowing horns descry
Ghost white horses, hounds of death and long lost truth.
They raze all life with their sundering might

As they gather up the souls of the dead in flight
Striking with a fear none but their kindred can endure.
When the wild hunt rides on a thundering night

Bringing down the skies and singing back the light
Around our fires only hope can see us through.
They raze all life with their sundering might

Then vanish to Annwn from tumultuous heights
Ending the old year and heralding in the new.
When the wild hunt rides on a thundering night
They raze all life with their sundering might.

A forest
holds a very small possibility
in the sigla of trees
and in a ruddock’s song.

Raindrops lace the ivy,
in a cinema of shade
fairytales catch hands
with desperate grace.

For in my nightmare
the leaning yew fell down.
The door to Annwn closed,
although the wolves still howl.

The people were dead,
the gods were gone
and the ghosts no longer mourned
their shadowed passing.

like a white stag bounding
from Annwn’s mounds
with red-eared hounds
and antlered huntsmen.

Now we read
the sigla from the trees
and listen out
for a ruddock’s song.

In the cinema of ivy
our myths still dance
a forest of possibility
in a raindrop’s glance.

‘Porth-Annwfyn. Some numinous, arcane agnomen, but which to my dream cognition was livid as moonshine and did plainly signify: Gate of Elysium.’
– David Jones The Dream of Private Clitus

I.
Where is the door?
The shadowy portal exists
In the thickness of the veil
In the heart of mist
Where life divides
And fateful cataracts meet.
There are as many doors
As you have eyes that open.

II.
And who is the porter?
It is never who you thought it would be.
It is always who secretly you knew
From the world’s beginning.

III.
There are many doors
And I can speak of but a few.

Trees keep doors.
They are not in the front or back
But in the spiralling melt
Into arboreal existence.
This is the forest path.

Look into a river
To find yourself on the mirror side.
Remember to be returned
With the turning of the tide.

To reach the summer stars
Seek out a silver space ship.
Beware for Elysium’s bliss
Is more deadly than Annwn’s darkness.

Beside the door of death
A spectral hound sits.
He’s black or white-
Depends on the way
You’re looking.
He swallows whole souls.
The lucky ones hit the ground running.

Clouds arrive, seasonal and grey,
smothering the town’s jagged edges.
Wrapped in an amniotic haze
I wander streets of dream forgetting
old boundaries between sky and pavement
in the driving rain. Wind spirits
and fierce hounds howl the day down.
I feel the out-breath of a distant king.
The wisdom of Nodens is lost to me.
I wander streets of dream forgetting
all boundaries in the driving rain.

*Nodens is an ancient British god associated with sleep, healing and hunting. In a relief found at his temple in Lydney he is depicted with hounds and putti (wind spirits).