On the second of February, the date of the Celtic festival of Gwyl Ffraid/Imbolc, I was not celebrating the first signs of spring but was in hospital having an umbilical hernia repair operation.

The land was covered by snow and ice and I was aware of the presence of my god, Gwyn ap Nudd, Winter’s King. To he, who guides our souls between the worlds of the living and the dead, I prayed to lead me into the near death-like state of coma that is general anaesthesia and back to wakefulness again.

To he, who dies a ritual death at the hands of his rival Gwythyr ap Greidol every year at Calan Mai, who enters a frozen sleep throughout the summer months in Caer Ochren, the Castle of Cold Stone before reviving again in autumn to lead his hunt across the winter skies. I knew I could trust my soul.

I knew he understood what I was about to go through and worse for he comes from ‘many deaths’.

And so he took me, but not to where I’d expected. Just two weeks previously I made my lifelong dedication to Gwyn and that night during my vigil I was taken on a really intense journey of descent. I was expecting something like that or worse like waking up whilst I was being operated on.

Instead I awoke feeling as if I was roaring drunk raving about Maredsous. For about fifteen minutes I had no idea what Maredsous was and neither did anyone else in the recovery room. Finally I remembered it was a Belgian beer. Gwyn had taken me on a tour of the bars in Belgium! I have always loved Belgian beers but never been able to afford to visit Belgium and he had taken me there.

Another uncanny thing that happened is that, afterwards, the nurse told me that when I went under everywhere went icy cold and they had to turn the heating up – a definite sign of Gwyn’s presence.

So I woke up feeling wowed and grateful and much firmer in my trust of him.

Post-operation I have been stiff, sore, and had more far more bloating and swelling than I expected. However, as the snow has slowly thawed, I have been making a slow recovery. As I have walked a little further from my house every day I have noticed the snowdrops in my garden in full flower, the first celandine flowering in Greencroft Valley, a yellow wagtail dipping in the brook, the wood alive with the songs of tits and robins. 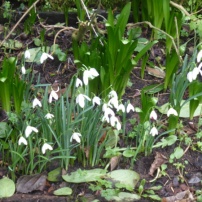 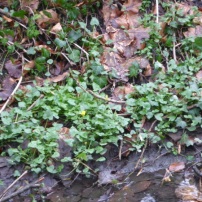 Since the beginning of November, when I drew the Hagalaz rune, ‘Hail’, at the Way of the Buzzard drumming circle I have experienced a winter of harsh descent which began with a stress fracture of my metatarsal leading to me being unable to walk for over six weeks. Then I had my lifelong dedication to Gwyn, which was challenging and intense, but ultimately confirming and wonderful. Now, finally, this operation, significantly on my naval, my natal place, which seems bound up with the visions of death and dissolution and rebirth that I experienced during my vigil on my dedication night.

The Anglo-Saxon rune poem for Hagalaz/Hægl speaks of my experiences of being the white grain of the initiate in Gwyn’s cold castle, tossed about on the winds of his hunt, and finally brought back in celebration and confirmation to melt into water and take seed in this soil as his lifelong awenydd.

Hail is the whitest of grain;
it is whirled from the vault of heaven
and is tossed about by gusts of wind
and then it melts into water.

So mote it be.