‘I have come hither to tell
Of the jurisdiction I have in the North;
Every region’s beauty is known to me.’
The Dialogue of Myrddin and his Sister Gwenddydd

Many people have heard of Merlin and a few of the northern British wildman, Myrddin Wyllt. But what of Gwenddydd, Myrddin’s twin sister, who was also an important prophetic figure from the Old North, whose legacy has been overshadowed by her brother’s?

Gwenddydd and Myrddin lived during the 6th century and their father’s name was Morfryn. From the poems attributed to Myrddin in The Black Book of Carmarthen (1350), we can derive that he was a warrior of Gwenddolau. His deep fondness of his lord suggests the twins grew up at Caer Gwenddolau (Liddel Strength) in Arfderydd (Arthuret).

What kind of upbringing did Gwenddydd have? Gwenddolau was renowned as a ‘Bull-Protector’ and cattle-raiding warlord. Many legends surround him: he owned two birds who ate two corpses of the Cymry for dinner and supper; his gwyddbwyll set played itself; he conjured a mysterious battle-fog; his soul was gathered from the battlefield by Gwyn ap Nudd.

These stories have led scholars such as Nikolai Tolstoy to argue that Gwenddolau was the last of the northern British pagan warlords. Unfortunately this cannot be proven as many of the Christian warlords had magical abilities and, like Gwenddolau, were named as the owners of ‘The Thirteen Treasures of the Island of Britain, which were in the North’.

Whatever the case, Gwenddolau was a formidable figure. Gwenddydd grew up alongside Myrddin and their four brothers, Morgenau, Cyvrennin, Moryal and Moryen in a male-dominated culture where internecine warfare and cattle-raiding between the kingdoms of the Old North was the norm.

The ethos of the society was ‘heroic’. The warriors who committed the most blood-thirsty deeds in battle and stole the most cattle won immortality in the songs of the Bards. Both pagans and Christians believed that inspiration and prophecy originated from the Awen*; those able to give voice to it (particularly for military purposes) were held in high esteem.

The medieval texts suggest that women played a subordinate role to men as wives and home-keepers. How much this accurately reflects 6th century society and how much the gloss of medieval scribes is open to question. There are suggestions in several texts that Gwenddydd was seen as important, not only due to her upbringing at Caer Gwenddolau, but because of her intelligence and her prophetic abilities.

Gwenddydd eventually married Rhydderch Hael** who ruled Alt Clut from present-day Dumbarton. It is my belief this was a political marriage to cement an alliance between the kingdoms of Arfderydd and Alt Clut. Whether this was arranged by Gwenddolau or initiated by Gwenddydd in accord with her own political aims remains a matter of conjecture. 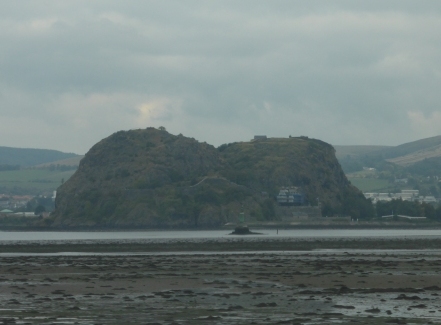 It’s my opinion that Gwenddydd was not just a pawn in the games of the male warlords. In ‘The Dialogue of Myrddin and his Sister Gwenddydd’ from The Red Book of Hergest (1380 – 1410) she speaks of ‘the jurisdiction’ she has ‘in the North. / Every region’s beauty is known to me.’

Gwenddydd was an important co-ruler. Not only did she have ‘jurisdiction’ over Alt Clut and, perhaps, Arfderydd, but the whole of the North. This may have been founded on her prophetic abilities: her capacity to see the unfolding of the fates of all the regions.

The alliance between Arfderydd and Alt Clut lasted for at least as long as it took Gwenddydd and Rhydderch’s son and daughter to grow to fighting age (from around 550 to 573 – a long time in those war-torn days!); it is notable that both Gwenddydd’s son and her daughter became warriors. It then broke down with tragic consequences, leading to the Battle of Arfderydd in 573 (whether Gwenddydd foresaw this battle remains uncertain).

Many reasons have been cited for the Battle of Arfderydd. In The Triads of the Island of Britain (13th C), it is listed as one of three ‘futile battles’ because it was fought over a Lark’s Nest: possibly an allusion to the nearby fortress of Caer Laverock. Another theory is that Rhydderch allied against Gwenddolau with other Christian warlords to bring an end to northern British paganism. Alternatively it may simply have been about land and power.

Rhydderch and his allies, Gwrgi and Peredur, fought against Gwenddolau and his nephew, Dreon ap Nudd. Gwenddolau was killed. Gwenddydd’s son and daughter fought on Rhydderch’s side and were slaughtered by Myrddin. The latter tragedy is referenced in a poem attributed to Myrddin called ‘The Apple Trees’ from The Black Book of Carmarthen (1350):

‘Now Gwenddydd loves me not and does not greet me
– I am hated by Gwasawg, the supporter of Rhydderch –
I have killed her son and her daughter.
Death has taken everyone, why does it not call me?…

Oh Jesus! would that my end had come
Before I was guilty of the death of the son of Gwenddydd.’

These lines show that Gwenddydd was devastated by Myrddin’s slaughter of her children. Understandably, her love of her twin had turned to hatred, and she refused to speak to him. Other poems show that Rhydderch was actively pursuing the killer of his children.

In ‘The Apple Trees’, Myrddin mentions his ‘sweet-apple tree’ has ‘a peculiar power’ which ‘hides it from the lords of Rhydderch’. In ‘The O’s’, which are addressed to a ‘little pig, a happy pig’, he tells it to ‘Burrow in a hidden place in the woodlands / For fear of the hunting-dogs of Rhydderch Hael, defender of the Faith.’

These poems are attributed to Myrddin during the time he was wyllt (‘wild’ or ‘mad’). Tormented by battle-trauma, guilt, and grief, and haunted by a blinding vision of a martial battalion in the skies***, he wandered the forest of Celyddon ‘for ten and twenty years’ amongst other gwyllon (‘wildmen’ or ‘madman’) speaking poems to the wild creatures. When he emerged, he used the art of prophecy to warn against future bloodshed.

Eventually, Gwenddydd forgave Myrddin. Her reasons for this decision remain mysterious. Did she realise Myrddin’s slaughter of her children resulted from the fatal circumstances of the breakdown of Gwenddolau and Rhydderch’s allegiance and the power-hunger of the northern warlords? Did she sympathise with Myrddin’s suffering? Did she acknowledge his use of prophecy to warn against future wars?

Their reconciliation is evidenced by several texts. In The Life of Merlin (1150) Gwenddydd persuades Rhydderch to send out a messenger with a cither to charm Myrddin back to Rhydderch’s court. When he arrives she kisses him and twines her arms around his neck. However, unable to bear civilised life, Myrddin flees back to the forest, where Gwenddydd builds him a home. After Rhydderch dies, Gwenddydd joins her brother in Celyddon.

We learn ‘She too was at times elevated by the spirit so that she often prophesied to her friends concerning the future of the kingdom.’ Gwenddydd speaks of future conflicts through a blend of cosmic, animal and martial imagery:

‘I see two moons in the air near Winchester and two lions acting with too great ferocity, and one man looking at two and another at the same number, and preparing for battle and standing opposed.  The others rise up and attack the fourth fiercely and savagely but not one of them prevails, for he stands firm and moves his shield and fights back with his weapons and as victor straightway defeats his triple enemy.  Two of them he drives across the frozen regions of the north while he gives to the third the mercy that he asks, so that the stars flee through all portions of the fields…

I see two stars engaging in combat with wild beasts beneath the hill of Urien where the people of Gwent and those of Deira met in the reign of the great Coel.  O with what sweat the men drip and with what blood the ground while wounds are being given to the foreigners!  One star collides with the other and falls into the shadow, hiding its light from the renewed light…’

Finally, Myrddin says, ‘Sister, does the spirit wish you to foretell future things, since he has closed up my mouth and my book? Therefore this task is given to you; rejoice in it, and under my favour devoted to him speak everything’.

In The Story of Myrddin Wyllt (16th C), during the period of his madness, Gwenddydd delivers food and water to her brother’s forest abode. She shares her dreams with Myrddin and he interprets them. Three dreams relate to the unfair distribution of wealth, the fourth concerns an attack by foreigners and in the fifth, in a graveyard, Gwenddydd eerily hears children speaking from their mother’s wombs.

‘The Dialogue of Myrddin and his Sister Gwenddydd’ takes place when the twins are aged: Myrddin has ‘white hair’. After telling Myrddin of her ‘jurisdiction… in the North’ Gwenddydd asks him a series of questions about who will rule Prydain. The positions of prophet and interpreter are reversed and we can conjecture that the twins habitually swapped roles. With the aid of wyllon mynydd (‘mountain ghosts’) Myrddin  predicts all the rulers of Prydain until:

‘…the time of Cymry suffering
Without help, and failing in their hope–
It is impossible to say who will rule.’

The tone then becomes apocalyptic:

‘When killing becomes the first duty
From sea to sea across all the land–
Say, lady, that the world is at an end…

There will be no portion for priest nor minstrel,
Nor repairing to the altar,
Until the heaven falls to the earth…

Extermination, lady, will be the end…

There will be no more kings!’
Gwenddydd consoles Myrddin:
‘Arise from your rest,
Open the books of Awen without fear.
Hear the discourse of a maid,
Give repose to your dreams.’

It is clear that the twins’ deaths are drawing near. Gwenddydd suggests Myrddin seek communion. Brother and sister finally commend one another to God and ‘the supreme Caer’.

This echoes a story from The Life of St Kentigern (12th C)****. Myrddin predicts his ‘threefold’ death by stoning, being pierced by a stake and drowning and asks for the sacrament from Kentigern. After receiving it he flees to meet his predicted end by being stoned by shepherds and falling onto a stake in the river Tweed.

Nothing is recorded about Gwenddydd’s response to her brother’s death or how she perished. However, from ‘A Fugitive Poem of Myrddin in his Grave’ in The Red Book of Hergest we can infer that Myrddin continues to speak from the afterlife with ‘mountains ghosts’, who ‘come to me / Here in Aber Carav.’ It is thus likely Gwenddydd also possesses the ability to speak her dreams and prophesies with the aid of spirits from her grave: her ‘supreme Caer’.

As our world is threatened by many ends: climate change, mass extinctions, global warfare, what does she dream? Could her story – one of loss, forgiveness and a determination to prophesy against future bloodshed, form a source of inspiration for people seeking alternative narratives to the militant worldviews responsible for her son and daughter’s death, the deaths of millions of others, and our living landscape?

Coile Coire Chulic – one of the last remnants of Celyddon

*Divine inspiration.
**This is depicted in The Life of Merlin (1150), a fictionalised account of Myrddin’s life by Geoffrey of Monmouth based on earlier sources. Myrddin appears as Merlin and Gwenddydd as Ganieda.
***This is recorded in The Life of Merlin and The Life of St Kentigern. I believe Myrddin saw Gwyn ap Nudd and the spirits of Annwn as in The Black Book of Carmarthen, Gwyn states his presence at Gwenddolau’s death as a gatherer of souls. The spirits who interact with Myrddin and Gwenddydd may be spirits of Annwn.
****Here Myrddin is named Lailoken, which is derived from Llallogan ‘other’.