‘The bitch Rhymi… in the form of a she-wolf… she goes around with her two whelps. She has killed my livestock many times, and she is down below Aber Daugleddyf in a cave.’
– Culhwch and Olwen

I was in a multitude of shapes before I assumed wolf-form. My keen sense of smell, my canine teeth, the sense of awe surrounding the silence of my feet and my savagery were all conducive to my role as a death-eater.

I was feared and revered by the people of Prydain for thousands of years until they decided their dead: human and animal should not be eaten by wolves.

I’m not sure what brought about this decision – whether it was their abandonment of hunting for farming, their penning in and marking ownership of the herds, the arrival of the sheep or the religion of the sheep with its shepherd-like patriarchs who despised both wolves and women.

Whatever the case, I became reviled. Whenever farmers caught me raising my jaws from a half-eaten carcass, gnawing bones dragged from a freshly dug grave, they sent huntsmen after me with hounds, bows and arrows, knives and spears, to bring back the trophy of my head.

Of course, I knew how to deal with huntsmen. My most ardent pursuer was Deigyr of Caerdydd. When numbers and brute strength did not succeed, he decided to track me by stealth instead. Disguising his scent in fox urine he followed me from kill to kill. Leading him into Caerdydd, I slipped off my wolf-fur and, taking a softer form, allowed him to buy me a flagon of bragget.

We got talking about the art of hunting and the nature of the wolf. The bragget slid down like hot blood. Soon I was back at his house, lounging on a wolf-skin rug, admiring the furs on his walls, the heads of beavers, badgers, foxes, boars, and wolves.

After we slept together I killed Deigyr with his hunter’s knife and devoured his corpse. Many moons later I gave birth to two whelps: Gwyddrud and Gwydden, in a sea-cave beneath Aber Daugleddyf.

Their suckling on the polyps of my teats was interrupted by a ship with a rude white prow carrying hundreds of warriors. As they fired their bows into the water I snapped every arrow with my jaws and rose up, barging and harassing the vessel I recognised as Prydwen to the shore.

An army awaited me with endless rows of spears and shields.

When I showed no fear, Arthur called on God to change me into my own form, grasped my wolf-fur and pulled it off.

The spears dropped to the floor.

The King of Prydain recoiled in dismay, eyes bulging like sea anemones, face pale as coral, “Please God, change her back!”

When his plea went unanswered, Arthur desperately attempted to throw the fur back over me, but it landed limp and useless on the sand.

“Please God, change her back. Please cover her up!” 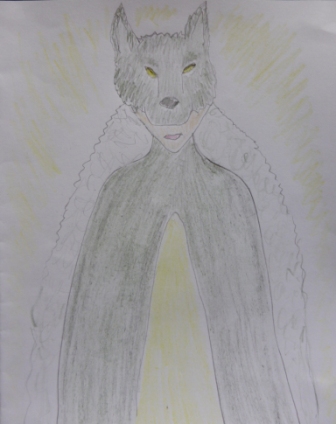