‘He was buried in Maentwrog, above Y Felenrhyd, and his grave is there’
The Fourth Branch

In autumn last year I visited Aber Gwenoli in Coed Felinrhyd, the village of Maentrwog, and the Coedydd Maentwrog. These locations are all part of Snowdonia’s Atlantic oak woodland or temperate rain forest and are associated with the death of Pryderi, ‘Care’ or ‘Worry’, the son of Pwyll and Rhiannon. 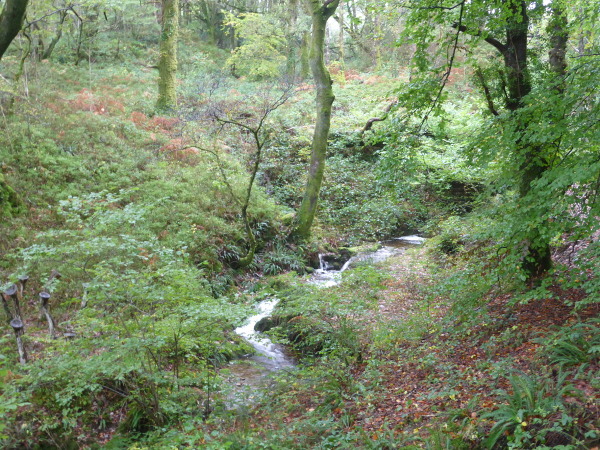 Pryderi is the only character who appears in all four branches of The Mabinogion. This has led scholars to speculate he may be the central figure. If this is the case he is a hapless kind of ‘hero’. Although he enjoys success in battle, he is constantly in trouble, sometimes on account of forces beyond his control, at others because of his impetuousness and lack of discernment. He is particularly unskilled at dealing with magic and with the uncanny forces of Annwn and this proves fatal.

On the night of his birth Pryderi mysteriously disappears when his mother and her women fall into an enchanted sleep. He reappears just as mysteriously when Teyrnon cuts off the enormous claw of a monster to save his foal. It’s clear he was stolen by the forces of Annwn, but the reason isn’t stated.

After Pwyll dies, Pryderi becomes the ruler of Dyfed and manages to conquer the three cantrefs of Ystrad Tywi and the four cantrefs of Ceredigion, incorporating them into the seven cantrefs of Seisllwch.

He is named as of one of the seven survivors of the terrible battle between the British and Irish in Ireland where the Irish dead are thrown into the Cauldron of Regeneration and reborn. Whether he survived through his skills in battle, sheer luck, or by cowering in a corner is not revealed.

Pryderi falls victim to Annuvian magic again when he pursues a white boar into a fortress and, enraptured by a golden bowl, gets stuck to it. His mother follows and suffers the same fate. With a ‘tumultous noise’ in a ‘blanket of mist’ they are both whisked away in the enchanted fort. It takes all the wit and persuasion of Manawydan to win them back from the otherwordly enchanter, Llwyd Cil Coed.

It is later revealed Pryderi is the owner of a herd of pigs whose ‘flesh is better than beef’. They were were sent to him by Arawn, a King of Annwn. This gift has its basis in Pwyll’s special relationship with Arawn. Pwyll traded places and identities with Arawn, literally becoming the Annuvian King and ruling in Annwn for a year. He won Arawn’s friendship by defeating his rival, Hafgan, and not sleeping with his wife. Pwyll received the title Pwyll Pen Annwn and they began to exchange horses, hunting dogs, hawks, and other treasures between their kingdoms.

It is possible to conjecture that this relationship has a deeper meaning. If Pwyll ‘is’ Pen ‘Head’ of Annwn, his and Arawn’s roles and identities remain fluid and interchangeable. Pryderi is the son of both Pwyll and Arawn, and thus a semi-Annuvian figure. This might explain why the forces of Annwn snatched him away the night of his birth – perhaps to initiate him into the Otherworld and meet his other father*. It is of interest he and his mother, Rhiannon, who is herself a divinity who originates from Annwn, are captured by the enchanted castle whilst Manawydan and Cigfa remain free.

In Triad 26. Pryderi appears as one of ‘Three Powerful Swineherds of the Island of Britain’. In Celtic mythology swineherds are often powerful magicians. The triad tells us Pryderi tends seven swine brought by ‘Pwyll Lord of Annwn’ and given to his foster father, Pendaran Dyfed. He keeps them in Glyn Cuch (the place Pwyll met Arawn). He is called a ‘powerful swineherd’ because no-one can ‘deceive or force him’. This portrait of Pryderi is much at odds with his gullibility in The Mabinogion.

The magician-god, Gwydion, nephew of Math, the ruler of Gwynedd, tricks Pryderi into giving him the pigs. He does this by disguising himself and eleven of his men as poets and conjuring twelve stallions with golden saddles and bridles and twelve hounds from toadstools. Pryderi agrees to exchange them for the pigs.

A day later, when the enchantment wears off and Pryderi finds only toadstools in his stalls and kennels (a scene sadly left to the imagination of the reader), he raises an army and pursues Gwydion north.

The two armies travel together in peace to Y Traeth Mawr. However, at Y Felenrhyd, ‘The Yellow Ford’, a bank of sand across the river Dwyryd, battle breaks out again because the foot soldiers cannot resist shooting each other.

To prevent further slaughter Pryderi sends a message requesting Gwydion engage him instead in single combat. Gwydion agrees. ‘Because of strength and valour, and magic and enchantment, Gwydion triumphs and Pryderi is killed.’ Pryderi shows courage in taking on the trickster-god. Yet, surprisingly, his prowess in combat is not described. If he is the central character his swift end is a disappointing climax.

After being stolen away to Annwn on two occasions Pryderi returns there for his third and final sojourn.

We are told ‘he was buried in Maentwrog, above Felenrhyd, and his grave is there.’ A possible place of burial might be the village church where there is a marker stone. However, the church is dedicated to Saint Twrog, who reputedly threw the boulder from the Moelwyn mountains and killed a she-devil. In other accounts a giant threw the stone and destroyed a pagan altar. Aside from the line in The Mabinogion there are no folk memories connecting Pryderi with Maentwrog, ‘Twrog’s Stone’. 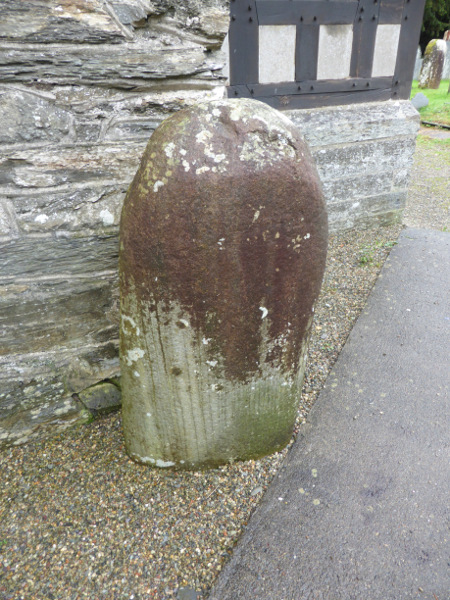 An alternative location for Pryderi’s burial place appears in ‘The Stanzas of the Graves’ in The Black Book of Carmarthen. ‘In Aber Gwenoli / Lies the grave of Pryderi’. Aber Gwenoli is a stream that runs down from Llyn Tecwyn into the river Prysor, which then joins the Dwyryd at Y Felenrhyd. With help from Greg Hill and another friend I managed to locate it just below Ivy Bridge.

Afterwards we completed the circular walk of Coed Felinrhyd, taking in the autumnal colours, the multitude of lichens, mosses and liverworts supported by the rainforest climate.

Just before we reached the end we found a ‘story telling chair’, placed there as if it was just for us, and took it in turns to read Pryderi’s story from ‘The Fourth Branch’.

After departing I was not sure of the meaning of this visit. I now have an inkling of understanding. If Pryderi is the son of both Pwyll and Arawn and of Rhiannon he is an Annuvian figure who was killed by Gwydion. Gwydion’s theft of Pryderi’s pigs and slaughter of Pryderi are not the only instances of him stirring up trouble with the Otherworld.

Gwydion also stole a dog, lapwing, and roebuck from Annwn, inciting Arawn, ‘the Wealthy Battle Dispenser’ to lead an army against him. This included enchanted plants, trees, monsters, and giants. Arawn (presumably with the Cauldron of Regeneration) even brought Brân the blessed back from the dead!

Gwydion in turn enchanted 34 different trees and shrubs against Arawn. With help from his nephew, Lleu, ‘radiant his name, strong his hand, / brilliantly did he direct a host’ and the warrior-bard Taliesin, Gwydion’s men and the battling trees defeated the forces of Annwn.

For some reason I’m being drawn by the deities of Annwn to look at the damage Gwydion’s trickery has caused. Whether my patron god, Gwyn ap Nudd, is ‘the same’ deity as Arawn, Llwyd ‘Grey’ and Brenin Grey ‘The Grey King’, who all haunt the mist-soaked oak forests of Snowdonia, is not for me to determine. All I know is I feel ‘his’ influence drawing me back to these stories of the British Foretime and to North Wales where land, language, myth, and the misty breath of the gods are one.

*For a detailed discussion of joint fatherhood in Celtic mythology see Will Parker’s The Four Branches of the Mabinogi p167 – 170.

13 thoughts on “A Grave for Pryderi”