‘He got up with Arthur’s sword in his hand and the image of two golden serpents on the sword. When the sword was drawn from the sheath, it was like seeing two flames of fire from the serpents’ jaws. And it was not easy for anyone to look at that, because it was so terrifying.’
Rhonabwy’s Dream

On the edge of Celyddon two serpents
danced, ziz-zag bodies tumbling, twining, jaws
bared, jets of fire
hissing from their sword-
like tongues as they rose and fell in terrifying
splendour beneath the golden

sun competing for the favour of a golden-
eyed female. Arthur followed the serpents’
tracks to behold the terrifying
sight. His jaw
dropped as their sword-
like bodies intertwined in deadly combat; fiery

and tempestuous as the fires
of Hell. From the burning undergrowth a golden
lizard scurried to avoid their sword-
play – a flash in a serpents’
eye before jaws
closed over him and a terrifying

darkness. Remembering the terrifying
battle between gods of ice and fire;
Flame-Lipped and Wolf-Jaws,
white and golden-
haired interlocking like serpents
wielding flaming and ice-rimmed swords,

Arthur decided he wanted a sword:
sharp-edged, cloud-lit, to tame those terrifying
rivals. He grasped the serpents,
hissing and spitting fire
in his golden
gauntleted hands beneath their jaws,

took them to the forge of anvil-jawed
Gofannon. “I want a sword
of purest gold,
beaten into the most terrifying
form; living, breathing two flames of fire,
harnessing the strength of these struggling serpents.” 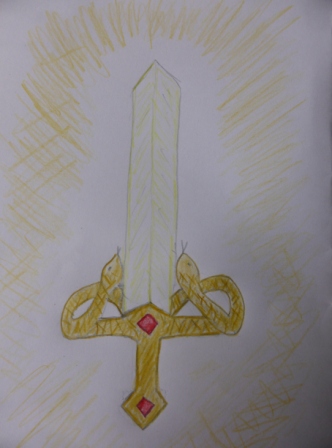 *This is one of the poems that didn’t make it into Gatherer of Souls, but relates to the theme of Gwyn’s opposition to Arthur. The form I have used is the sestina.