‘The knife of Llawfrodedd the Horseman, which would serve for twenty-four men to eat at table.’
The Thirteen Treasures of the Island of Britain

Llawfrodedd the horseman
chooses his own side,
serves no lord but himself,
but will lend his knife
as and when he sees fitting.
Thus it seems ominous
when he sits down at the table
of the Four Kings: Urien,
Rhydderch, Gwallog, Morgan,
and begins carving meat:
pork loin, a topside of beef,
the fat breast of a goose.
Twenty-four men are served
in the blinking of an eye.
The startled diners imagine
their foe thus butchered
and tuck in with added relish.
Llofan can see that blade
sliding quick as the deft needle
of an embroiderer between
the ribs of his target – Urien.
His killing hand is itching
as if bitten by an army of red ants.
The horseman will not part
with his weapon whilst he lives.
The assassin bides his time.
Llawfrodedd’s knife will dance
in a hundred red right hands
and at this carvery slip into mine. 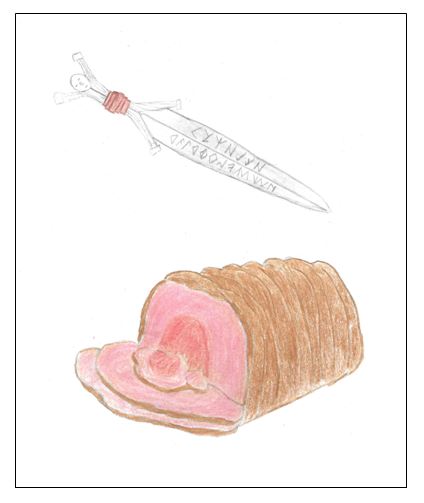 Llawfrodedd the Horseman was born around 490. We have no record of who his ancestors are. In Bonedd y Saint he appears as the father as Gwyddnabi and the grandfather of St. Idloes. Unlike most of the other owners of the treasures he is not included in the northern lineages.

Llaw means ‘Hand’ and frodedd may perhaps derive from cyfrodedd ‘twisting’ or difrodedd ‘devastation’. His epithet ‘the Horseman’ is translated from Farchog. In other texts he is named Farfog ‘the Bearded’.

In Triad 46. ‘Three Principal Cows of Britain’ Llawfrodedd appears as the owner of Cornillo, ‘Little Horn’. He is also listed among the warriors of Arthur’s court in Culhwch and Olwen and Arthur’s forty-two counsellors in Rhonabwy’s Dream. This suggests he was a significant figure in medieval Wales whose stories have unfortunately been lost.

Knives are a longstanding part of the human toolkit. The Oldowan tools show early hominids were using knife-like objects two-and-half million years ago. At Boxgrove in West Sussex, a site dated to 500,000 years ago, flint ‘hand axes’ were used as knives by Homo Heidelbergensis to expertly butcher an array of animals including horses, red deer, giant deer, bison, rhinos, lions, wolves, and hyenas.

Flint knives of various types were used until the Bronze and Iron Ages when they were replaced by metal (although the Beaker people continued to make handled daggers from flint and they were hailed to be ‘the finest flint knives ever produced in Britain’). Knives were commonly found buried with their owner as grave goods and in Bronze and Iron Age hoards.

Everyone owned at least one knife for hunting, butchery, and eating. Until the Middle Ages hosts did not provide knives at the table – people were expected to use their own. A knife was an essential item no-one could live without. The magical properties of Llawfrodedd’s knife show knives were an important part of post-Roman society and skill at carving was held in high regard.

Of course, knives also served a more sinister function – killing other humans. This is famously evidenced by ‘The Night of the Long Knives’ which occurred in the 5th century. According to Nennius at a ‘peace council’ initiated by Hengist, ruler of the Anglo-Saxons, with Vortigern, ruler of the Britons, each of Hengist’s followers was instructed to ‘hide his knife under his foot in the middle of his shoe’ and slaughter the Briton standing beside him on the shout of “Eu nimet saxas”. Three hundred of Vortigern’s elders were killed and the king imprisoned.

Arthur used his knife, Carwennan, ‘White Hilt’, to gruesomely slaughter Orddu, ‘Very Black’, the last witch of Pennant Gofid in the Old North, by cutting her in half so she was ‘like two vats’.

Llawfrodedd’s name, with its implications of a twisting and devastating hand, suggests his knife, with which he showed such skill with carving for twenty-four men, may also have served a deadlier purpose.

David Derbyshire, ‘Inside the mind of an ancient axeman’, The Telegraph
Nennius, History of the Britons, (Book Jungle, 2008)
Peter Bartrum, A Welsh Classical Dictionary: People in History and Legend up to about A.D. 1000, (National Library of Wales, 1993)
Rachel Bromwich (ed), The Triads of the Island of Britain, (University of Wales Press, 2014)
Sioned Davies (transl.), The Mabinogion, (Oxford University Press, 2007)
Geiriadur Prifysgol Cymru
‘History of the Knife,’ Knife Crimes.org