In October after the ritual to Epona I stayed overnight with Potia and Red Raven in Glasgow. The next morning, Red Raven kindly took me to visit Dumbarton Rock: Dun Breatann ‘Fortress of the Britons’ to continue my research on Gwyn ap Nudd’s lost connections with the Old North.

Dumbarton Rock stands on the estuary of the river Clyde beside the river Leven, stern, stony, commanding, cloven into two peaks, White Tower Crag and The Beak. Its proximity to an ancient hill fort on Carman Hill and Roman Forts such as Whitemoss guarding the estuary suggest its use as a defensive position from at least the Iron Age and Romano-British periods. Looking up at its vertical cliff face from beneath and climbing its 557 steps provided a distinct impression of how difficult it would have been to attack. 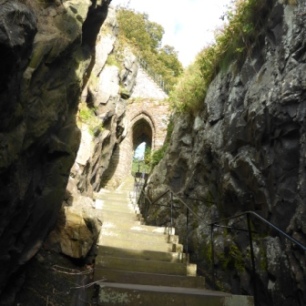 Dunbreatann emerged as the capital of Strathclyde, controlling south-west Scotland after the Romans withdrew from the Antonine Wall, in the 4th century. Later it was known as Alt Clut ‘Clyde Rock’. The first written reference comes from St Patrick from Ireland between 453 and 493AD, reprimanding Coroticus (Ceretic, ruler of Alt Clut) for taking his new Christian converts and selling them as slaves to the Picts.

The majority of its rulers were descendants of Ceretic: notably Dyfnawl Hen, Cinuit, Clinoch, Tutagual then Rhydderch Hael. After Rhydderch’s death in 612, rulership passed to another line stemming from Ceretic: Neithon son of Guipno and his lineage ruled until Dumbarton Rock was taken by the Vikings in 869.

A fragment in The Black Book of Chirk states that following the death of Maelgwn Gwynedd in 547, Elidyr Mwynfawr (first cousin of Tutagual and husband of Eurgain, Maelgwyn’s oldest legitimate daughter) attempted to seize the throne from Maelgwn’s illegitimate son, Rhun. Elidyr was killed at Arfon. This led to Rhydderch Hael, Clydno Eiddin, Nudd Hael and Mordaf Hael burning Arfon in revenge and being pursued north by Rhun’s forces to the river Gweryd.

Elidyr’s journey is recorded in a triad of ‘Horse-Burdens’ where the eponymous water-horse Du y Moroedd (‘The Black One of the Seas’) is said to have carried Elidyr and his party (seven and a half people including a cook hanging onto the crupper- hence the half!) from an unknown Benllech in the north to Benllech on Anglesey. Du is notably the steed ridden by Gwyn ap Nudd in the hunt for Twrch Trwyth (‘King of Boars’).

Rhydderch Hael (‘the Generous’) is the most famous of Strathclyde’s rulers. He was renowned as one of ‘Three Generous Men of Britain’ and owned a sword called Dyrnwyn ‘White Hilt’ which burst into flames when held by a well-born man and was numbered amongst the Thirteen Treasures of Britain.

The extent of Rhydderch’s generosity is hinted at by the third ‘Unrestrained Ravaging’ where Aeddan Fradog (‘the Wily’) came to his court and left no food, drink nor living beast (if Rhydderch was exceedingly generous and Aeddan took everything he must have been greedy and unrestrained indeed: one can sense the shock and disbelief of a contemporaneous audience).

Rhydderch championed Christianity and was the patron of St Kentigern. He came to power in 573, which coincides with the Battle of Arfderydd. Poems attributed to Myrddin Wyllt in The Black Book of Carmarthen suggest Rhydderch played a leading role in the defeat of the pagan ruler, Gwenddolau at Arfderydd and this was a factor in his rise to power.

In The Black Book of Carmarthen Gwyn ap Nudd states his presence at Gwenddolau’s death. Gwyn’s appearance to gather the soul of Gwenddolau and other dead warriors played a role in Myrddin’s madness and flight to Celyddon. The ex-warrior become wild man and prophet was hounded by Rhydderch Hael and supposedly converted to Christianity by St Kentigern.

Rhydderch also played a prominent part fighting against Theodric of Anglo-Saxon Bernicia with his Brythonic allies Urien Rheged, Gwallog ap Llenog and Morcant Bulc. During the campaign, whilst the Anglo-Saxons were successfully blockaded on Lindisfarne, Morcant assassinated Urien; a move which eventually led to the fall of the Old North.

Rhydderch’s successor, Nwython (Neithon) and his family feature prominently in the episode of Gwyn, Gwythyr and Creiddylad in How Culhwch won Olwen. After Gwyn ‘abducts’ Creiddylad from Gwythyr and takes her to Annwn, Nwython, his sons Cyledyr and Pen, Dyfnarth (Dynfawl?) and his Dyfnarth’s father Gwrgst Ledlwm join Gwythyr in an assault on Gwyn to win her back (four generations of Strathcylde Britons!).

Gwyn defeats Gwythyr and his army and imprisons them. During their imprisonment, Gwyn kills Nwython and feeds his heart to Cyledyr, who becomes wyllt (‘wild’ ‘mad’). Arthur then rescues Gwythyr and his men and places a command on Gwyn and Gwythyr to battle for Creiddylad every May Day until Judgement Day.

It is my intuition this story originates from an earlier seasonal myth where a hero (‘the Summer King’) challenged the god of Annwn (‘the Winter King’) for the love of a goddess of fertility and sovereignty who may originally have been revered as a free agent in a sacred marriage.

This episode is only one variant, fixed in 6th C Strathclyde, known because of its incorporation within the narrative of How Culhwch won Olwen (14th C). It is clear Gwyn has lost his status as a god of Annwn and Creiddylad her independence as a fertility goddess. Its fixity may be read to mark the death of a seasonal rite and its transition into story.

No doubt this coincided with the rise of Christianity, which led to Gwyn’s demonisation as the representative and literal embodiment of the ‘demons’ of Annwn and Creiddylad’s demotion to a helpless maiden flung like a ragdoll between two male lovers and finally locked away, powerless, in her father’s house.

The seasonal myth is thus replaced in the 6th century with a story designed for the political purpose of cementing alliances between the Strathclyde Britons, Gwythyr ap Greidol (deified as ‘the Summer King’) and Arthur against a common enemy: the demonised King of Winter and Annwn, Gwyn ap Nudd.

The disturbing sequence of Gwyn’s murder of Nwython and torture of Cyledyr has led me to question whether it has any historical basis. From my research so far there is nothing to suggest Nwython died a sudden or inexplicable death or disappeared during a campaign (often attributed to otherworldly forces).

However this does not mean such stories did not exist. Another explanation is that it was cited by the bards of Christian rulers to highlight the atrocities Gwyn committed against the lineage of Strathclyde to keep paganism at bay. One can only imagine the fear and repulsion of Strathclyde’s people and in particular Nwython’s descendants when it was voiced.

It seems possible early variants of these stories were told in the fortress on The Beak alongside inaugural poems which would form Y Gododdin and The Black Book of Carmarthen. The existing texts suggest belief in Gwyn as a psychopomp lingered on beside the Christian faith for a long while. As a guide and warrior-protector to some and a cruel, demonic figure to others, he haunted the margins of every recital of battle-tales.

After Dumbarton Rock was taken by the Vikings, the kingdom of Strathclyde re-emerged up-river at Govan and stretched from Glasgow into Penrith in Cumbria. During this transition and, later, when Strathclyde was finally integrated into Scotland in 1034 many Britons went into exile and settled in Wales. In medieval Wales the oral tales about Gwyn ap Nudd and the fall of the Old North were finally penned.

Since then Dumbarton Rock has seen various uses; most notably as a medieval royal castle with its famous Wallace Tower. It is now primarily a tourist attraction within the custodianship of Historic Scotland.

Time passes. History fades into story into myth and even myth is forgotten. Yet the deepest myths are fated to return from the most distant edges of the otherworld like a boomerang. 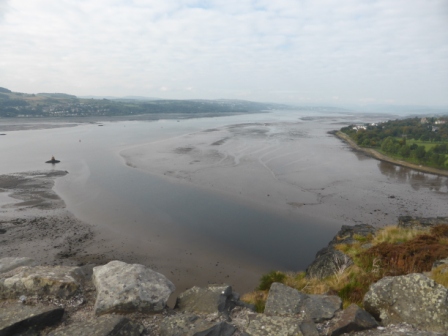 Looking out across the Clyde and Leven from the Fortress of the Britons I saw a pair of ravens who have lived forever on that ancient rock flying on the winds from there into poetry to the realm of the gods and back again. 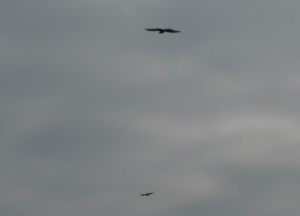 On that note I’ll thank Red Raven for taking me to Dumbarton Rock and bring this piece to end.