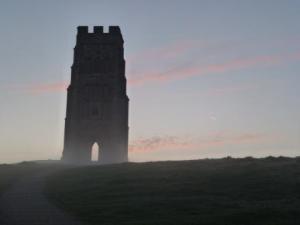 A couple of days ago I read write-ups of the OBOD (Order of Bards, Ovates and Druids) 50th anniversary gathering on Glastonbury Tor, on the blogs of Joanna van der Hoeven and Robin Herne.

It sounds like they had a grand time. Although one of the things Robin acutely pointed out was the irony that although the main topic was peace, the powers of place, including Gwyn ap Nudd and the Tylwyth Teg (the People of Peace) were not addressed or involved.

Why should that bother me? OBOD aren’t all pagans or polytheists. Hundreds of different religious groups use the Tor for various ceremonies- that’s part of its power and draw, and the eclecticism and chaos that constitutes the spirit of Glastonbury.

It was not until this morning I perceived my vexation was the symptom of an approaching realisation; I awoke with an image of the OBODies on the Tor in my mind combined with an overwhelming gnosis clear as the dawn; THIS ISN’T MY RELIGION.

I know the OBOD doesn’t pretend to be a religious organisation… however my discomfort about the lack of commonality I feel with Druids outside The Druid Network has been growing for a while. I’m beginning to feel the distinctions between my path and those of some other Druids are so huge that there is no meaningful common ground at all.

Plus… I recall Nimue Brown mentioning to be a Druid you must walk your path with conscious intent as a Druid. Looking back, I have done this as a Bard, and now do so as Awenydd. I believed these paths fitted under the umbrella term Druid but now I’m not so sure.

And I’m not so sure I did the right thing in claiming the name Druid for my religion pretty soon after joining TDN, on the ground I was a member of the network and a grove. It was much later I was gifted with the name Awenydd by Gwyn ap Nudd and the spirits of my local landscape.

So I’m beginning to wonder now whether my path as Awenydd, which is based in these relationships and expressing them through poetry, is not the religion of Druidry but a personal spirituality I live religiously?

I also wonder, because my practice focuses more on ‘anthropomorphised’ deities and spirits than most Druids whether I’m more of a polytheist? In answering that I find myself drawn back to the issue of commonality… I once wondered whether I was a Brythonic polytheist but decided I wasn’t as I don’t know enough about all the deities and their lore in depth, haven’t made enough effort to learn Welsh, and don’t follow a joint ritual structure.

So I wonder now…

Can polytheism be religious without commonality?

Must religion have a name?